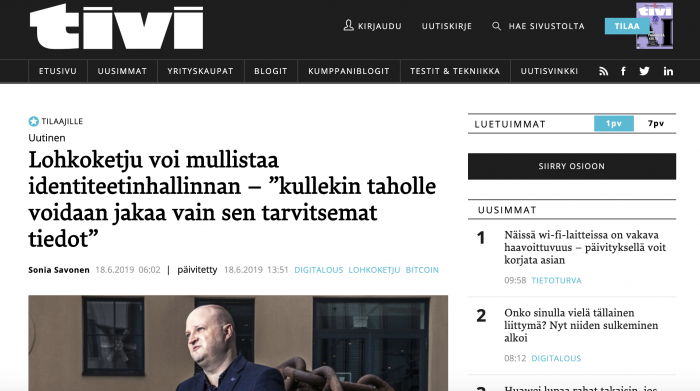 I had the pleasure to interview with tivi.fi – Finlands’ leading tech magazine and information provider – Many thanks to them and for the photo of me on “Blockchains” in the port of Helsinki

Here is the google translation which I am told is directionally accurate:

Over the next two years, companies are beginning to make real use of blockchains, estimates Antony Welfare, a consultant who has written a book about the issue.

Blockchain technology has been hyped a lot in recent years. Which sectors actually use it?

“Companies have only started to experiment with production in the last year. At present, block chains are utilized for example, in supply chains, monitoring and luxury products. Companies that benefit from proof of the origin or authenticity of the product benefit from block chain technology. ”

How has the attention received by bitcoin affected the technology behind it?

What is the most interesting area for blockchain technology?

“Digital Identity Management. People’s data and digital footprints are dispersed across different channels and services. For example, in healthcare, a lot of important information moves from patient addresses to blood tests. Blockchain technology allows data to be secured and only the information it needs can be shared with each party. The name, personal identification number, blood type and treatment history need not be available to all healthcare professionals. ”

Will people be able to take advantage of digital identity ownership in some way?

“Social media applications are constantly making money with user-related data. If data ownership is transferred back to people, they can set the price for their data and images. For example, downloading a picture taken by a user could cost a hundredth of a cent. Micro payments could be made through blockchains. ”

In what cases is block chain technology not worth using?

“The function of blockchain technology is based on people’s trust. It allows the parties to prove that they speak true. So it would not be worth using in an environment where a very small amount of people trust each other.

What is slowing down the deployment of block chain technology applications?

“Governmental governance is one of the factors slowing down all new technologies. The problem is that politicians often do not understand the new technology. Neither do we fully understand it. That’s why governments are following the development and innovation of new technology for a long time before they make it a standard. ”

When will blockchain technology become a commonplace?

“Companies are starting to use blockchain technology more and more over the next two years. In order to get the most out of technology, the existing information systems must be put into the cloud. It takes at least five to ten years. ”

The blockchains that gather information can become huge. Is this a problem?

“With the help of modern technology, it is possible to collect all the world’s products in one database. Speed is not an essential part of the blockchain, no other technology is faster today. ”

Blockchains will run into security attacks just like other technologies. How is security considered in blockchains?

“Blockchain entry and exit paths are the most critical parts of the chain and must be secured. Private blockchains used by companies require registration and permission to join the network. If the attack on the blockchain succeeds, it can be tracked in seconds and stopped quickly. ”

Blockchain technology is said to be the next internet. Will it change the world as much?

“The Internet is focused on long-term trading. Now the direction is increasingly towards value creation. The value can be proven reliably by blockchain technology, allowing people to trade without intermediaries. Blockchains alone cannot change the world, but they change the way we interact. ”