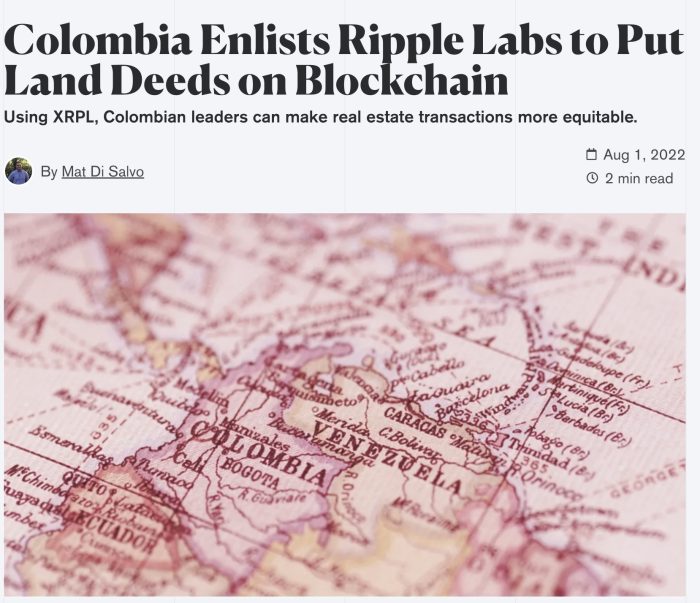 Colombia’s government has launched a partnership with Ripple Labs, the company behind the cryptocurrency XRP, to put land titles on the blockchain, part of a plan to rectify land distribution efforts so unfair they’ve led to decades of armed conflict.

Why would Colombia’s government want to do this? Because land ownership in the South American country is among the most highly concentrated in the world.

Ripple’s XRP is one of the most popular cryptocurrencies on the market, with the fifth-highest market cap as of this writing. An individual XRP coin may only be worth a fraction of the price o…

Colombia’s civil war, the longest running war in the western hemisphere, from 1964 until a 2016 peace deal, was rooted in the unequal distribution of land, with leftist guerrilla groups taking up arms against the state.

“Land is everything in Colombia,” Peersyst Technology CEO Ferran Prat told Decrypt. “This is what led to armed groups like the FARC starting a war with the government.”

“The point is that land is important in Colombia, so a system is needed that ensures land cannot be wrongfully taken,” he added. “Putting the information into a public blockchain that cannot be changed or altered will help.”

Many land owners in Colombia still don’t have papers to certify ownership over parcels they inhabit, Ripple Labs added. The project will start by certifying more than 100,000 land adjudications.

“With the public blockchain, once the transaction is recorded, it can never be deleted,” added Antony Welfare, a senior adviser at Ripple Labs. “That’s the most important part. If the government system is blown up, the owner of land will still be in a blockchain because it is held around the world in different nodes.”

Ripple is a blockchain that seeks to compete with Ethereum. It was originally launched to help banks and other financial institutions move money fast and without fees (while being very green)—and it still does that—but developers are using it to build applications.

The company behind the blockchain, Ripple Labs, is controversial: In 2020, the SEC hit it with a $1.3 billion lawsuit, alleging it had raised that amount in unregistered securities offerings since 2013. The lawsuit is still ongoing.