I was recently asked by Walid Al Saqqaf Founder of Insureblocks to talk about the book and my latest thoughts on #Blockchain and the world on enterprise Blockchain.  The following is an extract from the interview and the links to the podcast are below.

Join us to discover some brilliant insights on how to commercialize blockchain: 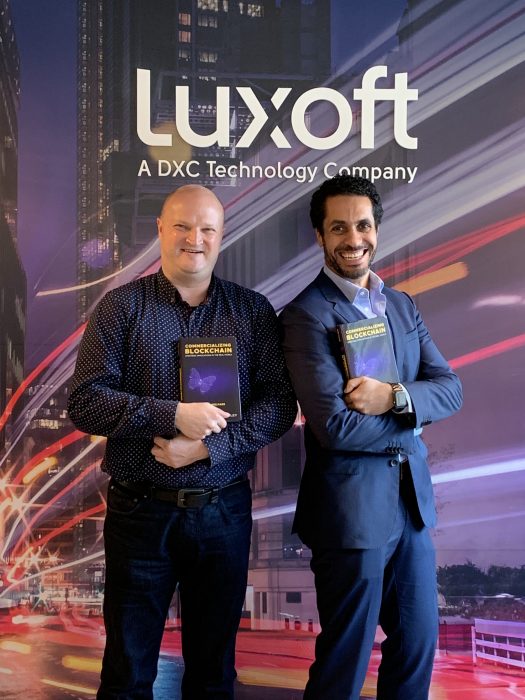 Antony Welfare is the Managing Director of Luxoft, which is part of DXC Technology and has accumulated a wealth of experience on blockchain across industries. He recently published the book Commercializing Blockchain whose content we will be discussing in this podcast. Antony is interested in real blockchain applications and is all about commercializing blockchain – using blockchain in a commercial business or a government to add value efficiency, trust, and a lot more which is discussed in this podcast.

How does blockchain compare to two companies who have a decade worth of trust in working together and have an API to sharing and exchanging information. Antony would really challenge if two companies, organisations or networks would really trust each other. Each party always reconcile the information they have as they don’t have the exact same copy of the data. At the end of the day the transparency and the trust isn’t there in a technical format. Blockchain is about making the trust and transparency there in a very clear black and white coded manner.

Back in 2017, Antony was working with Oracle Corporation and was doing some deep research on blockchain. During his research he realised he wanted to write about real blockchain applications and how the technology could impact individuals, businesses, and government communities. His initial thought was to write a blog to help him in creating material for the keynote speeches. It is at this moment that it dawned on him that there was an opportunity to write a book. Through his contacts from meetups and the feedback he was getting on his book idea he realised that not a single person in the world knows it all on blockchain. He invited 13 contributors to write different sections of the book from how contracts are formulated to global trade issues to consensus mechanism and what the future looks like.

The common and most interesting question he asked all of his contributors is what does blockchain look like in five years time. They all agreed that blockchain is going to be an enabler for us to build solutions to be more efficient to more trusted as a community and that no one will be talking about blockchain just like no one talks about TCP/IP for the web.

Email is one of the killer apps for the internet. We asked Antony what he thought would be the killer app for blockchain. Antony believes that the killer app is around identity. He believes that there will be an app that will sit on your device (mobile, laptop, etc..) that will hold the identity keys where you share what you want to share with whom you want to share it, what portion of the data and for how long. Essentially, self sovereign identity. Which means that similarly to how you use Google or Facebook but with the difference that you know what’s happened with your data, where is has gone, who has used it and crucially you determine that instead of Google or Facebook. Then tokenization of this data can also all you to get paid for how you wish your data to be accessed and used.

For Antony, identity and tokenisation are the two killer apps for blockchain.

Is blockchain a fad?

For Antony, it’s great, because people said the same thing about Amazon and about the internet.

Over the last couple of years people have been saying the blockchain is a fad. But it isn’t a fad, as it will soon become as normal as the internet is, and yet we didn’t think that back in the 80s and early 90s. Blockchain is an enable for all of us to build better businesses, better communications and it’s just going to disappear into normal business.

But over the last couple of years, people have said, it’s just a fad. It’s not going to happen. But what happens is not it’s not a fad, it just becomes normal. As we’ve said, you know, we all use the internet every day all day with our mobile devices, especially. And yet, we didn’t think that back in the 80s.

CEOs of a company have a duty of care for their companies. Part of that duty of care is a fiduciary duty that they have to assess the risks of new technology and of new entrants to the  market. Blockchain isn’t a fad, it’s a technology that enables your business to be more efficient and more trusted. This is backed up by plenty of evidence as supported in his book and also on Insureblocks. For Antony ignoring this point means that your company has a high risk to disappear in a similar manner to Nokia or BlackBerry.

Antony invites CEOs and directors to investigate blockchain technology as it will make things more efficient, smarter and cheaper. It will enable you to use the data and information properly, rather than spending a significant amount of time reconciling and adding things together for auditing.  If CEOs and directors continue to listen to the naysayers, saying blockchain is a fad, your business will suffer either from competition embracing the technology or from lack of innovation internally.

Antony wants to make it clear that we’re not talking about cryptocurrency but about enterprise blockchain solutions which as any enterprise solution adds value and makes things more efficient.

Antony talks about a case of a global bank that has a large number of entities across the global. 80% of their transactions are between their own company subsidiaries. Their bank reconciliation department has 300 people reconciling the bank accounts between the subsidiaries. This can be resolved with a blockchain solution which in turn could reduce the banks reconciliation department from 300 people down to 10 – 30 staff.

It wasn’t so long ago that there was this belief that blockchain would get rid of all middlemen. This has clearly not happened. Antony believes that middlemen of all shape and form have an opportunity to embrace blockchain and new develop new business models. Tokenisation of assets from art works to buildings to land is going to open new business models.

Blockchain technologies is equalising the world in a way. So normally big corporates are powerful and own everything and run everything because smaller entities and normal people can’t compete due to the lack of resources. Blockchain technology can enable those smaller entities to be a node and be part of a much larger network because of the share network and its decentralised nature. This will allow the gig economy, entrepreneurs and small companies more access to do different things, tokenise assets and be part of something much bigger.